Cyprus is not reachable by using a bicycle only, so I needed other transportations means to get there, but once arrived, I did a tour of the island on the bicycle together with two unexpected cyclo-friends.

While you travel in exotic countries, often will happen of course,  to not understand people talking in foreign languages. This is actually one of the reasons why I love traveling.
Being somewhere without understanding people talking, is a bit like walking with closed eyes, I can feel more connection with the earth.

In Cyprus I notice how paradoxical and contradictory our ‘civilization’ is

Police, which should protect the weaker often bites them up.
Hospitals, which should heal us and improve our health, sometimes (often?), transmit us sicknesses and make us pay for services and medicines we no need.
Governments, which have the duty to organize and legislate for the benefit of the public, regularly do the interest of private, powerful, individuals.

As final mockery, western cultures, which are based on the above-mentioned institutions, call “wild and uncivilized” population as native Americans that have much fairer, and nature-friendly, regulations.

UNDERSTANDING AND RESPECTING WHAT IS DIFFERENT

The most people I meet think either I am a poor guy or I am really rich to afford such a long travel.
For the most people is hard to realize that with little money you can travel all the world.

On the other hand, thinking about my extravagant Cypriot landlord and my wild father makes me reflect on the following:

There are things, or persons, that we will never understand.
There are behaviors that we will always find weird and we will never be able to give an explanation for.
This does not mean that we have to fight against it or judge these persons as wrong. We should still respect such things and give everyone his right to be different.

People doing wrong things are really useful to us, they show us how not to behave.

The main reason why we do certain things or we take a particular decision is not because it is right or we believe in it, but mostly because we are used to act in a certain way, or cause the most people do it.

In Limassol’s carnival, there was no rubbish on the streets, it was all quite clean and tidy, on the other hand, I remember that in Northen ‘clean’ counties, during carnival, the streets were full of the most diverse items. It seems a paradox; Carnival in Nordic, well organized, wealthy countries is much more liberating and wild than in southern nations.

With carnival everything changes, the most people take advantage of this event to do what is not allowed otherwise.

THE ISLAND OF CATS

Cyprus is artificially filled up with cats, this to keep snakes away, not exactly for safety, because snakes don’t kill normally, but for touristic reasons, to not let the tourists be afraid of them.

Here, people ask me about pets, I have just formulated an answer to the question: “do you like pets?”—My answer is—“as I try to not discriminate humans, I don’t want to discriminate animals based on race either.”

Humans try all the time to train pets to make them behave like us, actually, I think it would be more useful if WE would learn from them; wild animals, for example, can help us to understand how to survive.

AFTER A FIGHT WITH EIGHT PERSONS

On a windy night, I had a discussion with some people that ended up with little blood.
The day after the fight, I went to the hospital to check the stitches on my face. At the surgery department, I see a long ‘zig-zag’ queue; people are constantly skipping it by just running to the first place, I try to talk to them telling that this is not correct while an English man tells me: “here is always the same, Cypriot people don’t respect lines and you have to fight to get people not to skip”—I thought—“oh, no! fighting again…”

Now I know where South Italians got the habit of not respecting queue.

“I prefer not to use cars because they kill.”—If I may say this statement in Cyprus, people would not understand it—Jeeps are everywhere, it seems like there is a permanent rally competition going on.

The stairs of the hospital in Paphos were empty, the elevators were full and medical departments filled up with people in line. Same for the city: sidewalks are empty, while the streets are full of cars and people walks solely in shopping centers, in chaotic lines. 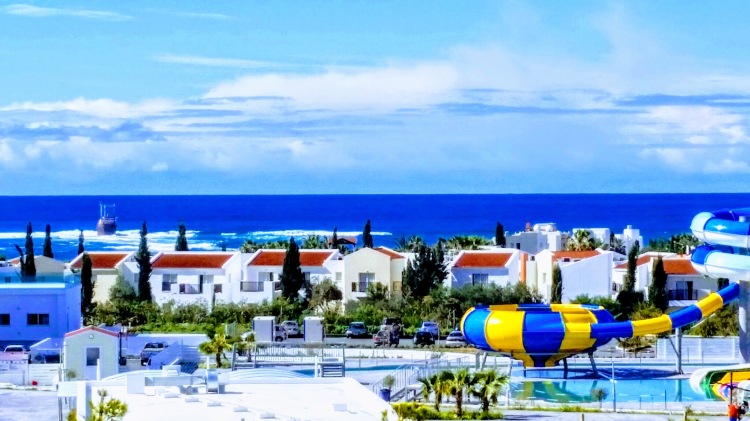 What’s to find in Cyprus? Sun and sea of course, but also:  people smoking indoors everywhere, the worst Internet connection, a huge amount of Shops of bodybuilding, Sports bets venues, Car rental—also everywhere!
Wealth show off is rampant too.

The difference between a person with a lot of money and someone with less wealth is that the first, most probably, can’t live without money, the latter can live both with or without money.

THE GOOD OF CYPRUS – English and no criminality

I was surprised to notice that everyone speaks English in this tiny island, even older people. The most of them quite good.

There is a significant British presence in Cyprus, for sure in Paphos. The reasons is that British were ruling here for a while. Now you find principally pensioners, but they are into interesting activities: second-hand shops, Theater workshops, cultural events, and related. It looks like that the British don’t really mix with locals, you can easily see restaurants stating in big letters outside: “real English breakfast, English television…”
While speaking with some English persons, they “confessed”  me they think that local people don’t speak proper English, I immediately thought: “let’s hope they don’t go to Italy!”.

One of the warmest people I met in Cyprus was a Syrian family, I felt more welcome there than at my own place. They are really my brother’s and sisters.
I had just a few connections with Cypriots, in Limassol, through CouchSurfing, I got to know some beautiful human beings.

A really good thing that happened here is that I’ve met other globe cyclers, one of them is  Jacques. But this has little to do with the characteristics of the island.

Another positive point is that there is nearly no criminality, it seems to be one of the ‘safest’ places on earth—if you exclude traffic dangers.—

People in Paphos speaks like Sicilians, or maybe Sicilians speak like “Paphonian”. The latter, I would guess.

THE BAD –  “Car culture, shopping, and smoke: everywhere in the air.” 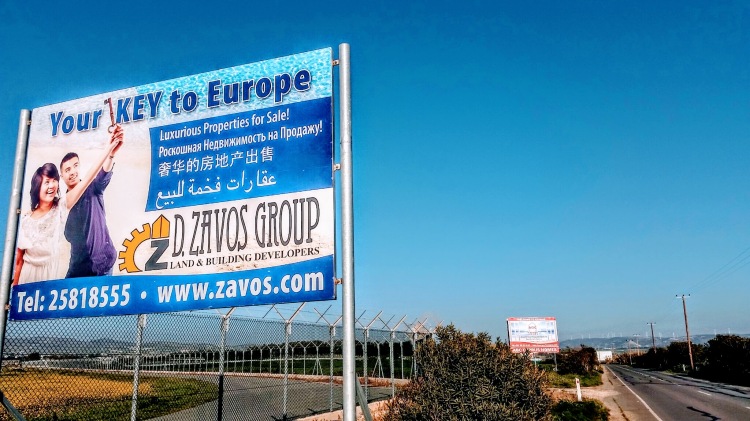 The mentality is extremely conservative in Cyprus, if locals see a girl speaking with strangers in the street she may not get married, for real!

They are selling land, houses, and any kind of building to foreigners, which is not a bad thing itself; the sad thing is that together with propriety sale, they are selling their soul, their culture. Giving to big real estate companies (called ‘developers’) the right of doing whatever they want with the land, even building, on the beach, cement  monstrosity for tourists.

People don’t walk in Cyprus, they all use cars. The bigger the car is (mostly SUV’s or jeeps) the higher is the status of the transported people.

Corruption, at high levels, is really common and accepted. 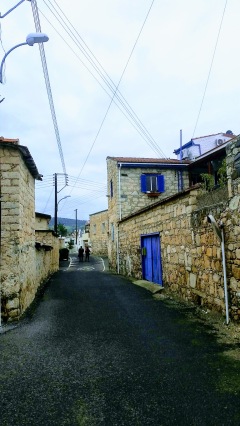 Unfortunately, the EU non-smoking law is not enforced in Cyprus, it means that wherever you go, you will get quite smoked, not sure a salmon would be any jealous.

Finally, I did manage to find some non-Smoking places:

CURRENT MISSION - Cycle from Finland to Argentina, play theater, and more of all: to enjoy! www.BikeTravelTheater.org ; View more posts

This site uses Akismet to reduce spam. Learn how your comment data is processed.