Have you ever asked yourself how a homeless felt the first night of sleeping on the street?

Remember, nobody was born homeless (or nearly Nobody).

Switching from a situation where you have all your comfort at home to an unknown scenario, having complete uncertainty and struggle going on every minute, burning your head. You end up spending all your efforts to find a place where to have a nap, a place that will never be your place.

This pandemic should make us more aware of this enormous problem. Even if we are struggling ourselves, there is someone out there struggling much more than us; someone isolated, not even having public spaces where to go because everything is closed.

We should ask our governments to care for the weakest first, the homeless.

WHY ENDING UP ON THE STREETS?

Imagine having alcoholic parents that hit you all the time or that you get fired from your job and kicked out of your house because you have no money to pay the rent. This could be enough to lose your home, or if you still have it, you may think that nowhere is worse than at home.

EVEN USING A TOOTHPICK IS A CHALLENGE

When you want to take out food stuck in your teeth, you get a toothpick from the cupboard, go to the toilet, turn the light on, look in the mirror and do the job: this all happens when you have a home.

What if you have no toothpick, no cupboard, no toilet, no light, no mirror, and you are even hungry and cold?

BEING SICK AS A HOMELESS

Let’s recall the last time we have been sick. Do you remember how you had felt?

Certainly not in shape to work, to be productive, to go around, travel, or be in the street, in the cold.

How could a homeless feel when he is sick? Do we think maybe that people sleeping outside are never ill or that they are used even to sicknesses?

Yes, I am sure that most people think that the homeless are not affected by illness; unfortunately, some people either believe that or don’t think anything about it at all, not wanting to take responsibility for a weighty topic.

Why should people care for someone in the street?

It’s crucial not to forget about something like that; we have to project ourselves out in the street with fever, bone pain, muscle stiffness, diarrhea, etc. We should do that every time we see a person sleeping in the street because they may be sick much more often than anyone else. They are domesticated human beings; as we all are, made to live in a comfortable environment, we can’t accept the typical stereotype of “getting used to homelessness,” becoming ‘strong’ and wild like animals. No; It’s not that. That’s ridiculous and out of reality.

A homeless is suffering every single second outside, he does not want to be there, and he is often sick, much more than a person with a house because being outside makes you get sick; it does not make you strong.

THE HOMELESS WHO CHOOSE TO LIVE IN THE STREETS

Many years ago, in Italy, in a Fine arts Academy, I was listening to a professor giving a lesson. He taught philosophy, talking about vagabonds and the homeless in the street like he knew all about this topic.

He was saying: “…these people in the street refuse society, they choose to live outside society and don’t want anything to do with the system…”.

For a long time, I really believed in this reasoning. Until I started to travel and I talked with people in the street personally.

I discovered later that this teacher didn’t know anything about the problem.

HOMELESS PEOPLE MAY BE RUNAWAY CRIMINALS

We may have heard often, too often, people saying that homeless folk could be dangerous or even criminals; therefore, the reason why they are in the streets may be directly linked with escaping from a punishment.

This is a rather imaginative, malicious, not realistic presumption. Spending just ten minutes with someone in the street will make you understand how harmless and sweet they are.

Even if we would accept the untrue theory: homeless = criminal, we should still ask ourselves if it is right to abandon a human being in the street for the rest of his life without even essential assistance or food. Serial killers and war criminals still get food, shelter, and medical aid, among their rights.

WHAT A HOMELESS LACKS

Without too much fear of being wrong, I can say that just these three elements (or a mix of them) could be enough for someone to end up in the street.

I have met many people sleeping rough; I have never felt threatened by them or thought they deserved to be in the street.

It happened that I have been helped or protected by them, and they have been often generous to me, even though they didn’t have much (materially) to share.

Criminals, cheaters, and ¨bad people¨ are not homeless; they often live in villas or have even more than one house.

COVID HAS WORSENED A LOT THE SITUATION

I have not been able to have much contact with people in the street because of covid-19 restrictions.

I often felt missing contacts with people in the street; I thought I should have done more.

However, not in all countries policy makers took the right approach about people sleeping rough. 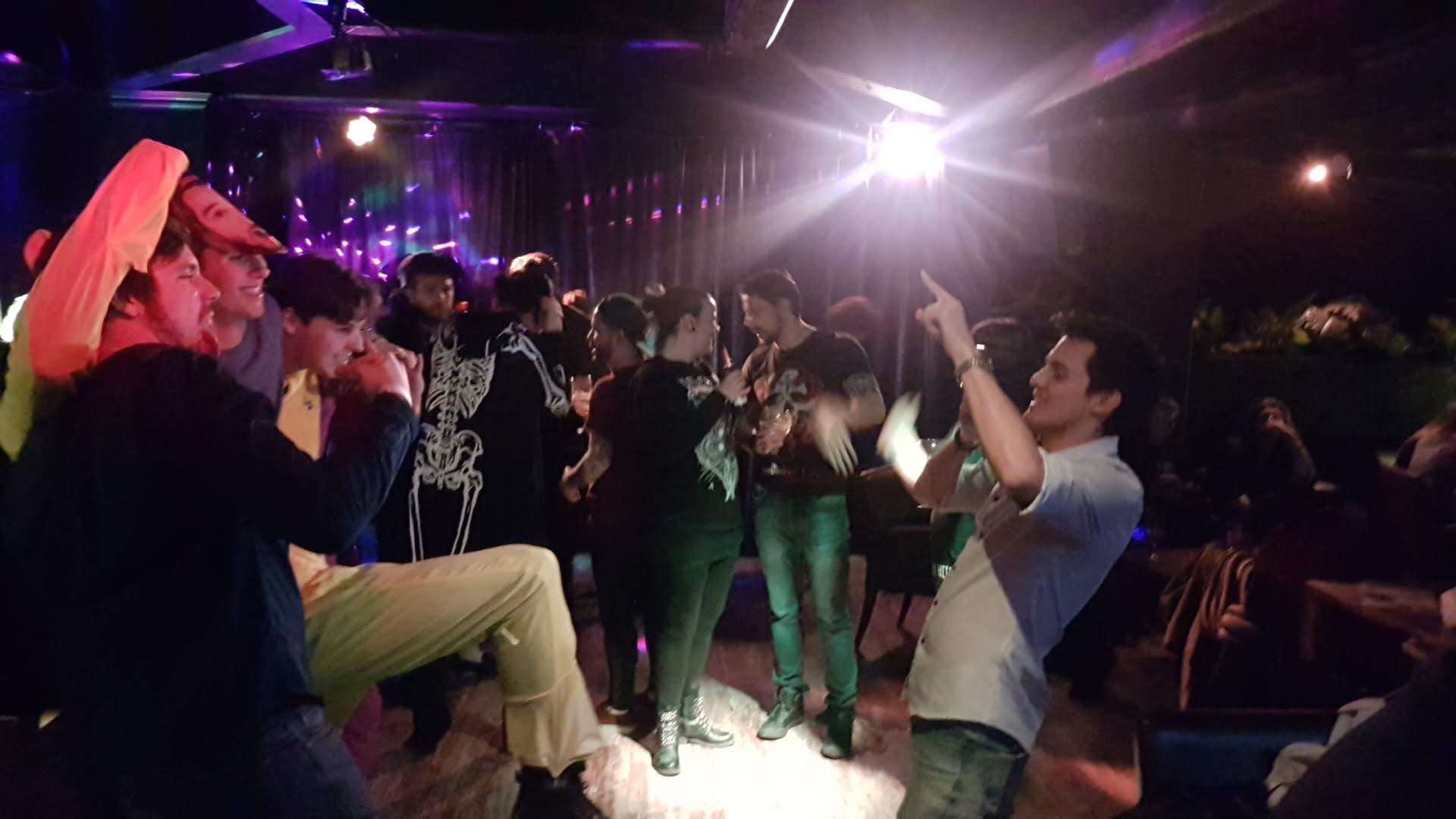 In this time of the pandemic, many of us may think about festivals.

Before the covid-19 changed our lives, I remember participating in a major festival build-up as a volunteer.

I was surprised to be the only one thinking about the vast waste of energy, materials, and resources while speaking with the other volunteers.

A colossal crew made of hundreds of people, experienced professionals, employed folk, students, and volunteers working for weeks, just to build up a festival of three days, for in total less than twenty hours of performances.

Stages, huge tends, high-tech installations, even mini homes, and gardens installed for a bit of fun.

During the construction, high-quality materials were thrown away, lots of mono-use goods were junked, not to talk about the relative human resources.

Lights were kept on also in the dark time, and there were mostly— non-eco-friendly —incandescent bulbs.

Although there were buildings nearby that could have provided electricity, many diesel generators were used to power up the stages: consequently, unnecessary pollution, noise, and smell were created.

It was impossible to count all drinks and snacks left on the ground or thrown in the bins, both during the festival’s construction and the event itself.

The ticket to join the happening was sold for about 200 euros. Long before the start, the festival sold out all tickets and people seemed to spend a lot of money at the event too. Thus, we have a lot of money to spend, but would we spend it for a good cause instead?

After the work and celebration, I had a moment of reflection: all those resources for such an ephemeral goal. What if we would be as euphoric and as committed to spending assets to fight income inequality or homelessness?

What if we would use all those installations and structure to help who needs?

Many want to adopt a dog; why not adopting a homeless?

My answer is that animals may be more welcome cause they don’t talk.

WORST IN LIFE: NOT KNOWING WHAT TO DO

If we should choose one, what would we choose as the worst things in life?

Of course, these are considered among the worst things. I agree they are a terrible thing.

I would add to this shortlist one more thing: ¨to not know what to do“, in a specific moment or with your life.

It could be as disarming and painful as slavery.

Our brain needs a certain degree of routine, fixpoints where we can anchor ourselves and from there start to create or just be.

The quotidianity of a homeless is full of this, it’s full of uncertainty, feeling that can drive one to madness, even the most stable-minded person.

When you wake up, you know for sure what to do. If it is Sunday, you know that you want to rest, for example.

A homeless has not just to survive every day as an ultimate challenge, but he has to create a sort of ‘task list’ from nothing, from the emptiness.

He has no means to do things that, for anyone else, are just regular daily tasks.

Merely brushing his teeth, he may spend one hour to find the right place.

Four quotes and one short story from people sleeping rough, before the pandemic

This means in English: “Life goes too fast, that’s why I go backward with the wheelchair.”

Here is a terminal cancer patient in a wheelchair that regularly slept in a shelter. His last wish was to have his apartment for the last years of his life.

I didn’t hear back from Henry since years; I tried to contact him without getting any reply.

JUN, A YOUNG MAN IN THE STREET (how I have met him)

I notice a man sleeping regularly on a sidewalk of a street in a suburb of the city. I see him several times, but I never take the chance to talk to him. A Saturday evening, I got some fruit to share. I share it with people in the street. I get to talk a bit with some gypsies, a young Danish woman, almost well dressed but with some blood on her face, and a Russian-speaking man which speech I could not understand. After having shared some apples and bananas, I go to a suburban area where I see the same man sleeping on the sidewalk.

He caught my attention because I see he is young; I stop and talk to him while preparing to sleep. He was setting up some blankets and cardboards, hiding his backpack, and about to lay down on the hard, cold sidewalk.

I tell him that we already saw each other; I ask if he wants some fruits, he replied positively, and we talk for a few minutes. He seems to be Danish, and I ask him if he has Facebook, he gives me his name, but I can’t understand, I let him write on my phone. I notice long black nails on his warm hands, surprisingly warmer than mine.

I talk about Couchsurfing and libraries; he says that he goes to the library when there are not too many people, to get a computer available and probably not attract too many eyes. I am about to ask him to come to my place if he wants, but I don’t do it, waiting maybe for another time to make that proposal, after having known him better.

Once the pandemic started, my social activities with people sleeping rough have decreased considerably, so I did not meet Jun anymore.

¨Sitting on the bottom of the metro’s staircase, It’s like watching a movie; you learn a lot by observing people.¨

I was trying to find Sebastiano, but I didn’t meet him anymore since a long time.

Peter is an artist and philosopher sleeping rough. He was living in a cold climate, in a city where there is almost no social assistance: Kiev

Peter struggled for his life until last year; then he left this earth because of not getting adequate, if any, health and psychological support.

CURRENT MISSION - Cycle from Finland to Argentina, play theater, and more of all: to enjoy! www.BikeTravelTheater.org ; View more posts

This site uses Akismet to reduce spam. Learn how your comment data is processed.